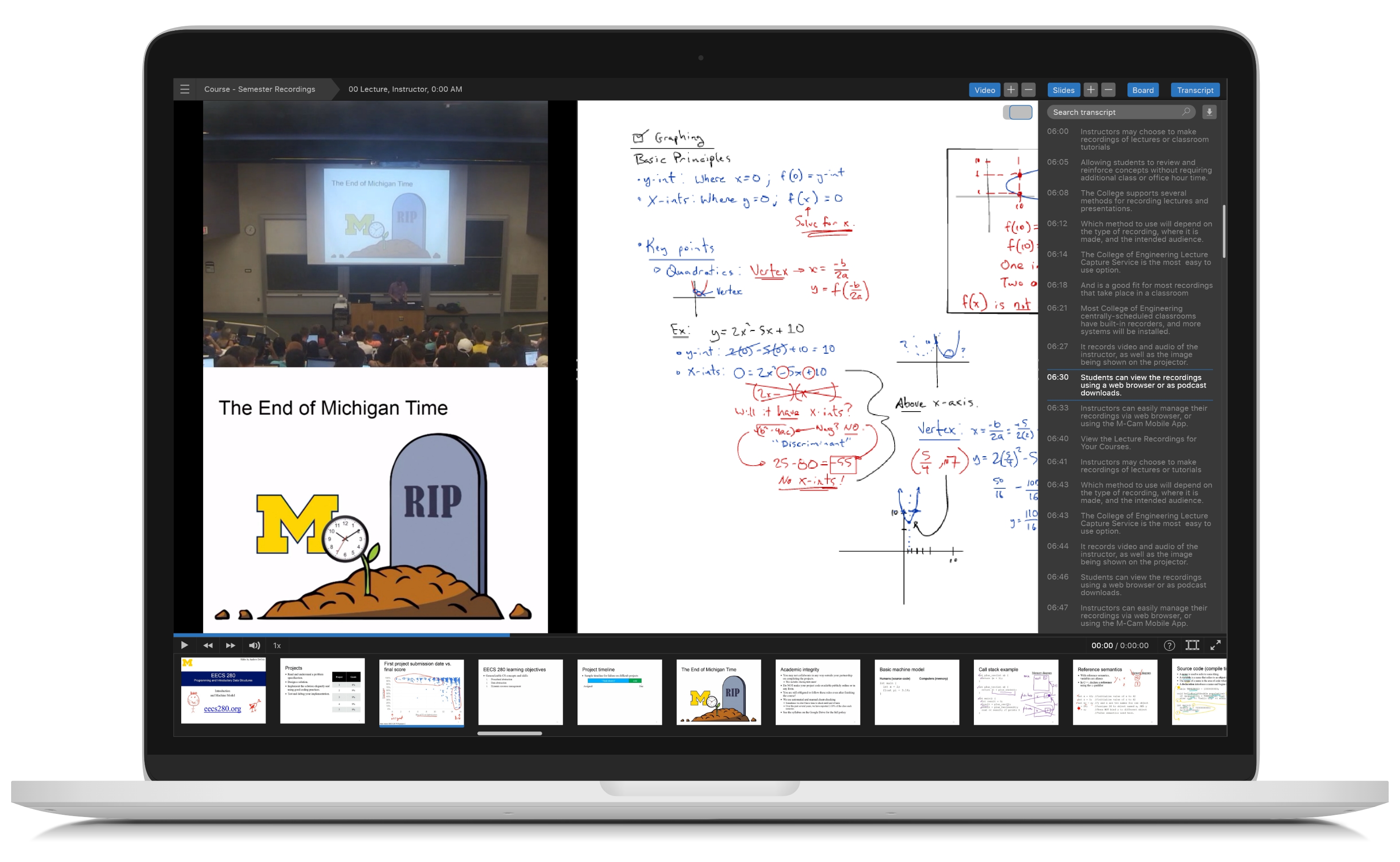 CAEN, the IT department of the University of Michigan College of Engineering

The University of Michigan Lecture Viewer is an internal system that allows students to watch recorded lectures and follow along with presentation slides, just like in the classroom. The Lecture Viewer is highly popular among students, with over half the UofM student body having used the system before.

During the Summer of 2019, it was decided that a plethora of new features would be added to the lecture viewer to further support students’ educational needs. Such features included a whiteboard view, a transcript view, a pop quiz feature, and more.

Problem Statement: In order to accommodate all the new features, the outdated user interface of the University of Michigan Lecture Viewer required a major redesign.

I led the redesign of the University of Michigan Lecture Viewer, designing and implementing new features to promote the empowerment of student users while also refreshing the system’s user interface and style.

As the lead UX designer, I was in charge of the Lecture Viewer’s design. I worked closely with John, who took on the roles of being both the Product Manager and the lead Developer.
Skip to Prototype

Given the circumstances of being on such a small team (of 2 people) with limited resources and a short timeframe, I was unfortunately not provided with the opportunity to conduct any official user research.

However, to ensure that the product met user requirements, I continuously asked my friends for their feedback on my designs throughout the entire design process. Furthermore, I advocated for conducting usability testing sessions at the end of the project.

After exploring the current Lecture Viewer and talking with other students about their complaints with the system, I was able to identify 3 main problems.

Taking these problems, I decided to translate them into more concrete design goals for the Lecture Viewer’s redesign.

With the addition of so many new features, almost every aspect of the lecture viewer required a redesign. I decided to proceed with a top-down approach, starting with the larger, more encompassing features. My process involved: 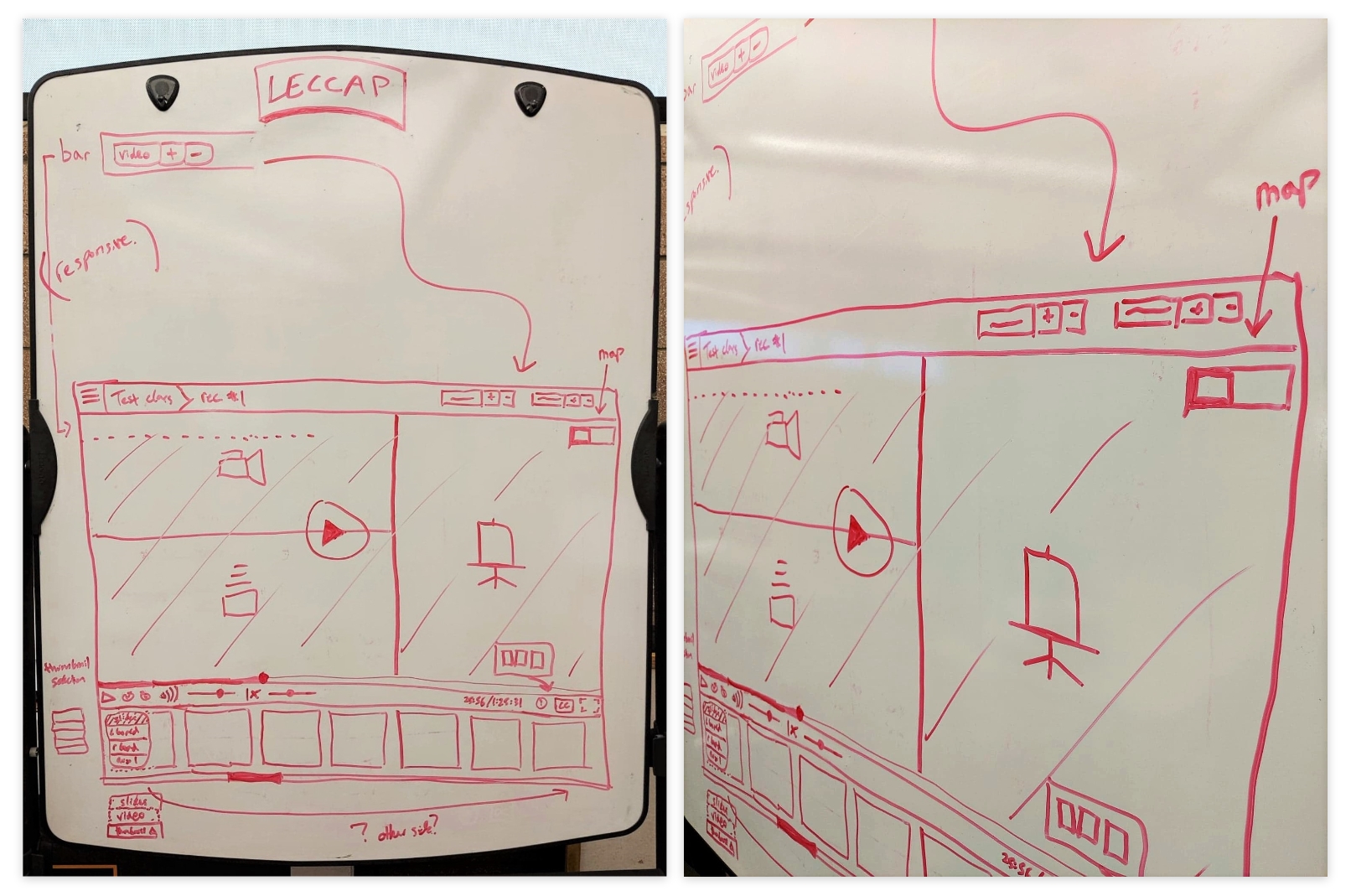 Some of my initial sketches of the redesign

The main section of the lecture viewer consists of multiple resizable windows that display a variety of sources. The current lecture viewer displays a maximum of 2 sources (classroom video and the presentation slides) that can be shifted around and resized with presets.

Problem: With the addition of whiteboard, transcript, and extra auxiliary sources, the new lecture viewer would need the ability to display up to 6 sources at once. With so many sources, how can users resize windows and customize their viewing area?

After brainstorming, I came up with 4 different solutions. I then individually prototyped these solutions to further explore their pros and cons:

Presets were immediately taken out of the picture, as they would only continue to limit users’ flexibility. Furthermore, they were not feasible with the greater number of sources.

When users hover over the source window, the controls to resize the window appear as an overlay.

When users hover over the source window, the controls to resize the window appear next to the window.

The controls of all source windows would be placed in a separate bar at the top of the screen.

Solution:
While Solutions #2 and #3 had intuitive controls, their negatives are recurring and could easily end up frustrating users.

Solution #4 avoided the downsides of #2 and #3, but introduced a disconnect between the source windows and their controls. The downside of this solution was that users would probably need to learn how the system works their first time. To alleviate this issue, labels were added to source windows once users hovered over their respective controls.

Problem: The lecture viewer’s current control bar is confusing, with seemingly no correlation between the buttons grouped on the left and right.

Solution: As we are trained to read from left to right, I believe that the most important buttons should be placed on the left side, while the optional settings are placed on the right side. Additionally, the most commonly used buttons, such as the play/pause and full screen buttons, should be in the corners where they are quick to find and easy to click.

After referencing other video players on the market, the reasoning behind my design was further reinforced.

The whiteboard view displays what is wrote on a classroom whiteboard.

Solution: To achieve this, a small minimap appears when users hover over the whiteboard. This feature effectively provides users with a clue that the whiteboard can be scrolled, while also indicating their current position.

The recordings library displays other recordings, along with their basic information.

Problem: The existing recordings library features a two-column layout, with a list of recordings on the left and a detailed view on the right. However, the narrow left column requires users to endlessly scroll through lectures while the detailed view wastes a ton of space. 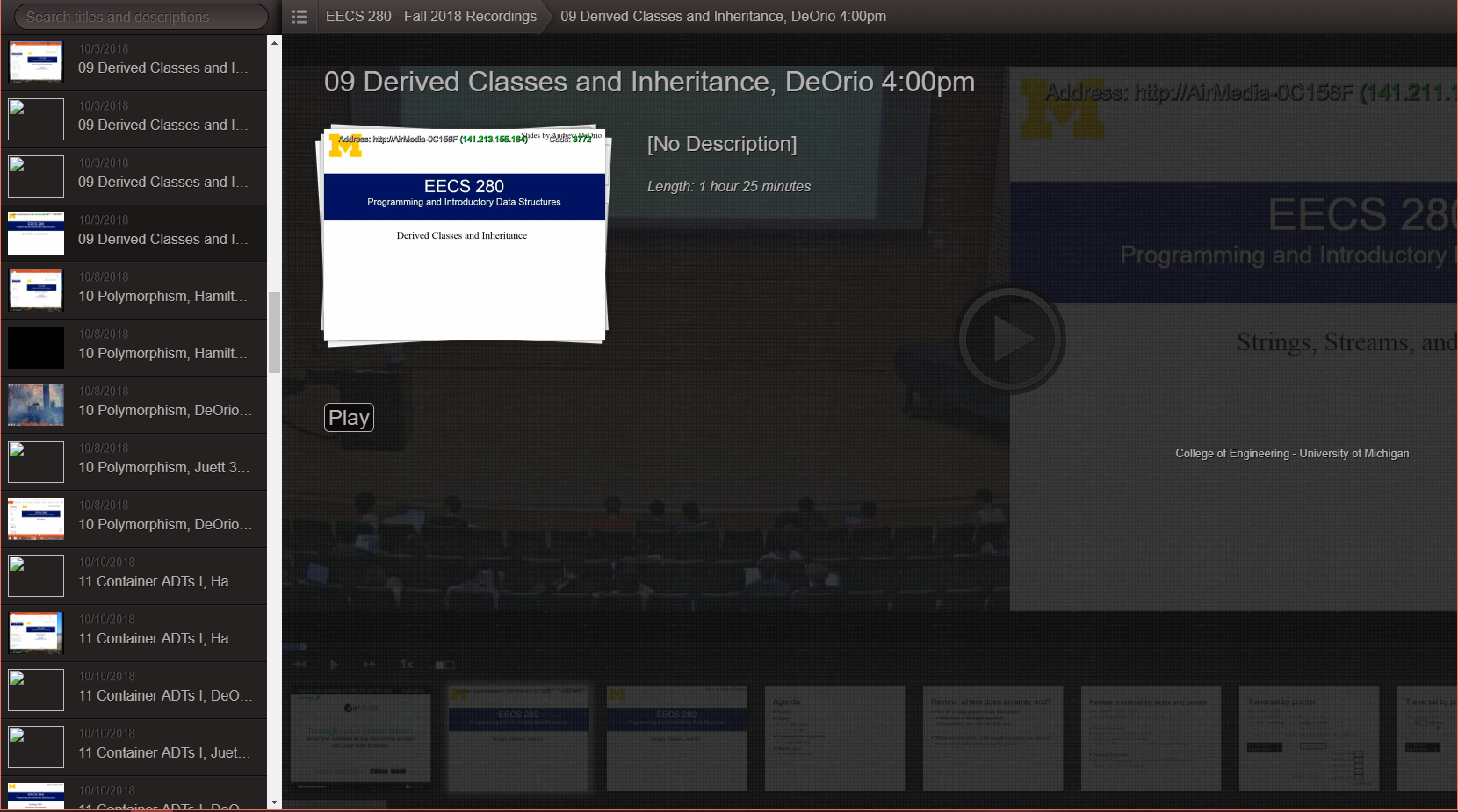 Problem: The current help window unnecessarily blocks the entire screen without pausing the video.
‍
Solution: The redesigned help window features a smaller pop-up that appears in the corner of the screen, without disrupting the playing video. Additional tooltips that explain how the Lecture Viewer’s new features work can also appear. 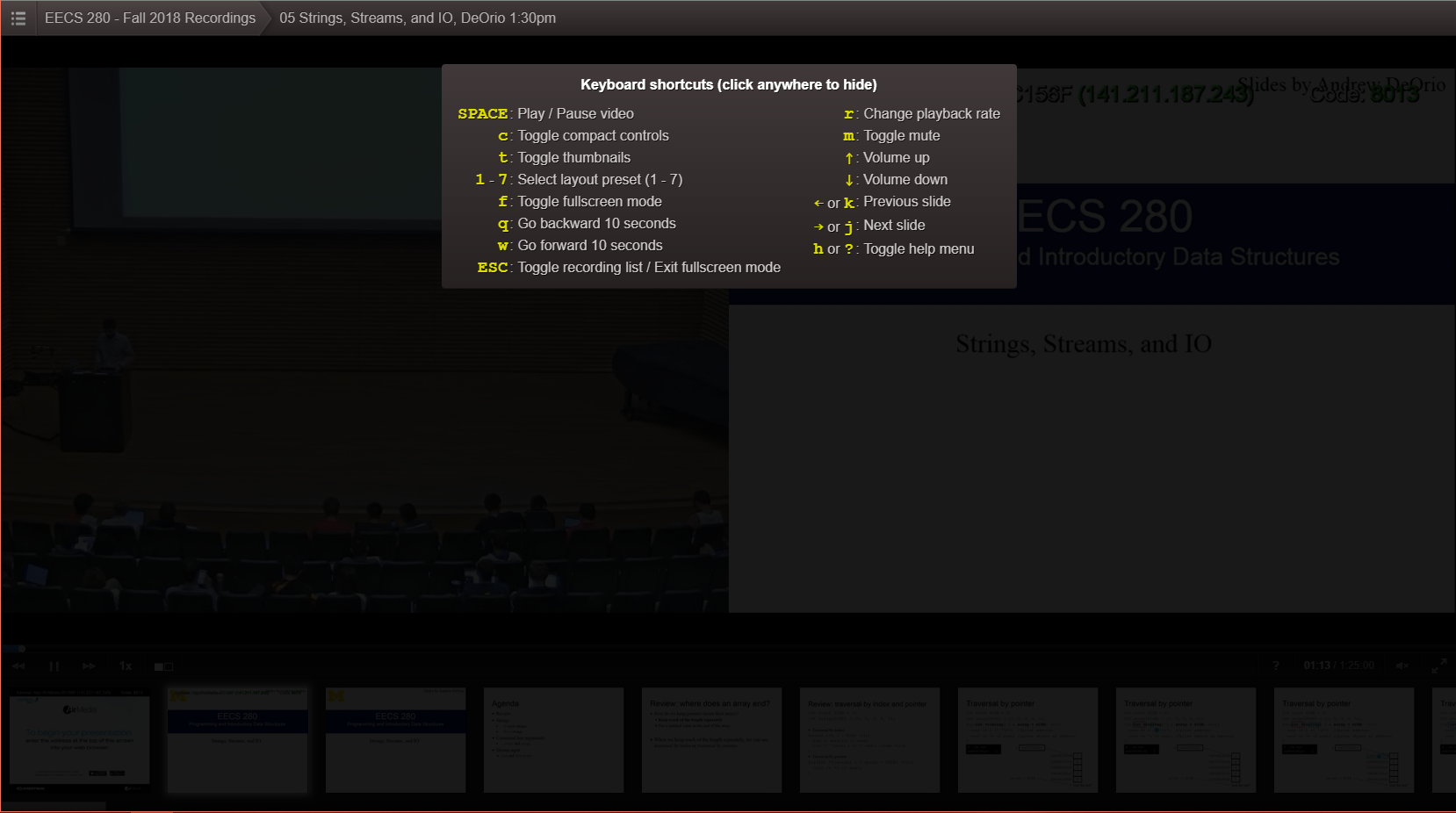 The redesigned Lecture Viewer received a modern facelift, with outdated gradients and sharp edges being replaced with solid tones and rounded corners. The redesigned viewer retains the original dark color scheme, but with additional white and blue accents to signify interactive elements.

SF Pro was selected as the lecture viewer’s typeface, as it is legible, modern, and consistent with other CAEN products.

We conducted usability tests with 5 students and 4 faculty members with the purpose of identifying users’ pain points and insights and pinpointing any additional design changes.

Surprisingly, the participants had little to no trouble completing assigned tasks, even when they involved the Lecture Viewer’s brand new features. The general consensus was that the redesigned system was a drastic improvement over the existing version.

Disconnect Between Source Windows and Controls

From the results of our usability test, we discovered that disconnect between source windows and their controls still existed, even with the addition of labels. In order to provide users with better signifiers, additional colored borders were added around source windows. These borders would then appear when their respective controls are hovered over.

The redesigned Lecture Viewer is currently undergoing beta testing with a few select classes where it will be tested by a larger number of users. Following the beta test, we will be sending out surveys to students and asking for volunteers to interview in order to gather additional feedback. The lecture viewer will then undergo additional iterations of design and development to continuously improve the system.

The Need of User Research

Prior user research would’ve been incredibly useful to determine the system's user requirements. While I spent countless hours brainstorming and designing solutions, much of it would be meaningless if it did not meet user needs. For this project, I was fortunate enough to be a part of the user group (as a student myself) and have easy access to many other students; however, this is certainly not the case for all projects.

The Value of Usability Testing

Real users often see things that designers and developers can easily overlook. Even with our quick and informal usability testing session, many small but crucial changes were identified.

There are Never too Many Ideas

There is no such thing as brainstorming too many solutions. Other solutions can always be used in the future through methods such as A/B testing to continue improving the product.

Thanks for making it this far! You've unlocked another one of my fun facts:
I learned how to cut my own hair in high school from watching YouTube, and now I haven't been to a barbershop in years